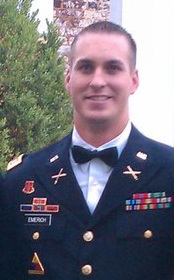 Captain Elliott Emerich is currently deployed in the Kunar Valley, Afghanistan with the 1st brigade of the 101st Airborne Division. This is his second tour.

He served a 15 month tour in Iraq in 2010 to 2011 during which he was awarded a Bronze Star for his actions in combat and promoted to 1st Lieutenant.

Elliott was raised in Flower Mound from age 5 until he graduated from Flower Mound High School in 2004 (National Honor Society, letters in Football, Basketball and held two Track records).

Elliott was appointed to United States Military Academy at first West Point, New York to play football for the legendary Bobby Ross, graduating in 2008 as a 2nd Lieutenant.

He was promoted to Captain after training in Fort Sill during the summer of 2012.